SORTING OUT THE CATORS IN MARYLAND/VIRGINIA/DC:
Timeline and maps at bottom of page

Thanks!!  A large amount of the information provided on this page is thanks to Robert Malay and Lonnie Walls.  Feel free to contact Robert Malay by clicking on his name.

Click on any pictures outlined in blue for full size images

Benjamin C. Cator was born on June 30, 1838, in Charles, Maryland. His parents were also born in MD. He lived in Charles, Maryland, on July 1, 1863. He likely married Laura Baden in 1867 in Carroll, Maryland. She was about 10 years younger than Benjamin as she was born in Maryland to Maryland-born parents around 1849 or 1850. Laura Baden and family from the Aquasco District and Milingham, Prince George's County, MD. Ben and Laura had three known children during their marriage.  Benjamin C. Cator/Cater fought in the Civil War as a confederate; deserted was captured and was imprisoned for 4 years.

The following is new from a reader/cousin who wanted to share this info.  Thanks!

Hi family -- I'm from the Baden side and came across these records. I didn't see any note of Benjamin's (1838) Civil War Service Record on your website...so here it is. Copies of the listings kept at the POW camps is attached for your review. Civil War Prisoner of War Records, 1861-1865 about Benjamin Cator

Transferred from Parkersburg to Camp Chase Ohio as a Prisoner of War. No Dates.

Record shows where Benjamin Cator was captured - Parkersburg Va. (when Va and WVa were actually one state - they divided after the Civil War).

When Benjamin Baden Cater was born on June 30, 1868, in Maryland, his father, Benjamin, was 30 and his mother, Laura Baden, was 19. He married Margaret Irene Minto on June 12, 1900, in Washington, District of Columbia. They had five children during their marriage. He died on April 23, 1937, in Washington, District of Columbia, at the age of 68, and was buried in Brentwood, Maryland.

==>For additional information on the Cator/Minto line, CLICK HERE.

In the 1910 Census for DC Benjamin Baden Cater/Cator is a laborer for the government.  He and his wife, Margaret Irene Minto Cater, have 5 children, all born in DC, all living, in the 10 years they have been married. Their residence is 1309 South Capital Street in DC.
.

In the 1937 City Directory, Baden is listed as a driver, married to Helen.

WWII Draft Registration 1942: Baden Minto Cater is now 40, had a ruddy complexion, hazel eyes, brown hair and is 5'6" tall.  He is married to Nellie Cater and they live in DC.

Their next child is also a son, Melvin Cater. 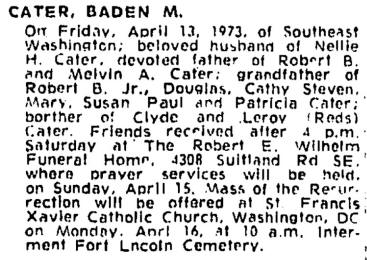 Margaret Irene Violet Cator was born on April 23, 1901, in District of Columbia. She married Claude Irving (Irvin) Padgett on June 19, 1919. They had one child during their marriage. She later married Herschel Chevalier. She died on May 12, 1967, in Fort Belvoir, Virginia, at the age of 66, and was buried in Arlington, Virginia with her husband Master Sgt. Chevalier. 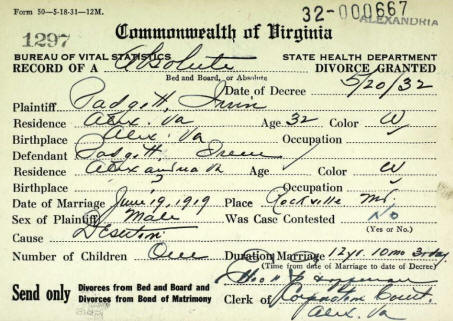 In 1932 Irene worked as a saleswoman for the Palais Royal Inc. per the DC directory.

In the 1940 Census Irene was living with her daughter and son-in-law (The Walter Cunninghams) in Alexandria.  Irene continued her saleswoman work.

In 1943 Irene married Master Sgt, U.S. Army, Hershel M. Chevalier, son of Monroe Bernard & Dessie (Nolan) Chevalier. He retired after 32 yrs. of military service and is buried at Arlington Cemetery.  In the 1947 Alexandria VA city directory, they are listed as no longer employed. 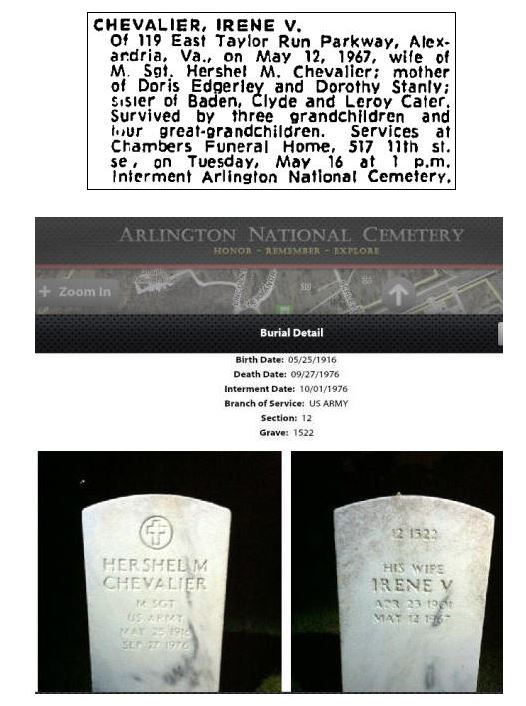 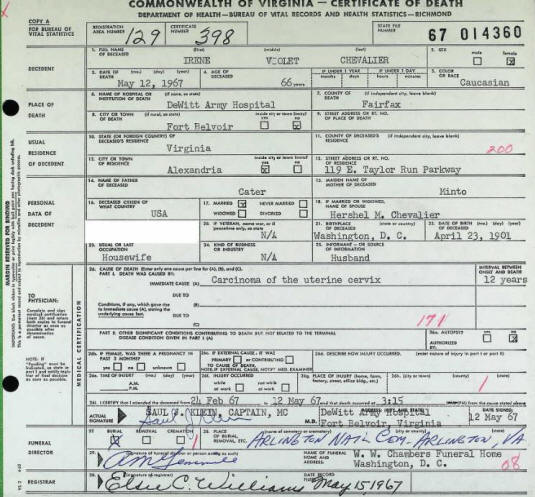 Benjamin "Clyde" Cater was born December 28, 1903 in District of Columbia. He had one son and one daughter with Mary  Estella Chick between 1926 and 1929. Do you know when he died? 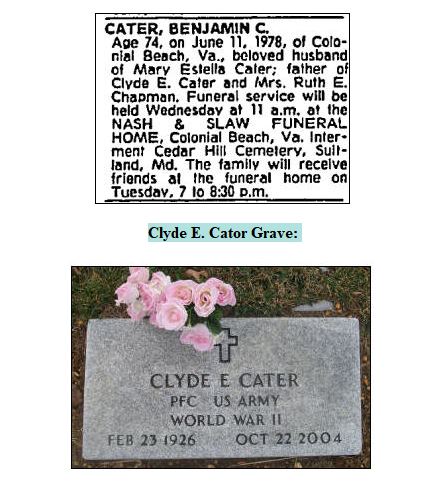 When Walter Leroy "Reds" Cator was born on February 14, 1906, in District of Columbia, his father, Benjamin, was 37 and his mother, Margaret, was 36. He married a woman 10 years older than he was, Catherine Rose Scheuch and then later married Fannie Pauline Staples on October 8, 1949, in his hometown. He died on November 19, 1974, at the age of 68. 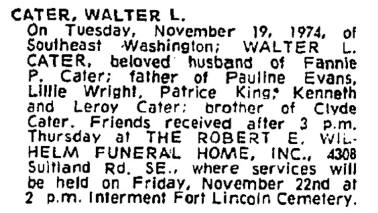 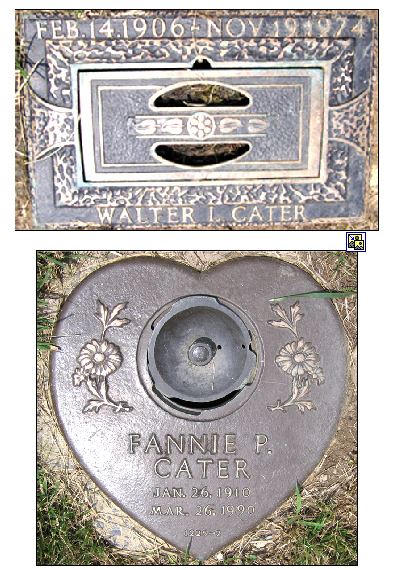 When Robert Ross Cater was born on March 21, 1908, in Washington, District of Columbia, his father, Benjamin, was 39 and his mother, Margaret, was 38. He had known three sons and two daughters with Agnes Mae Posey between 1930 and 1939. He died on June 9, 1958, in his hometown at the age of 50, and was buried at Ft. Lincoln Cemetery in Brentwood, Maryland.  Please see his obit below for names of children.

He was a plaster helper for a bulling contractor in 1930 census. 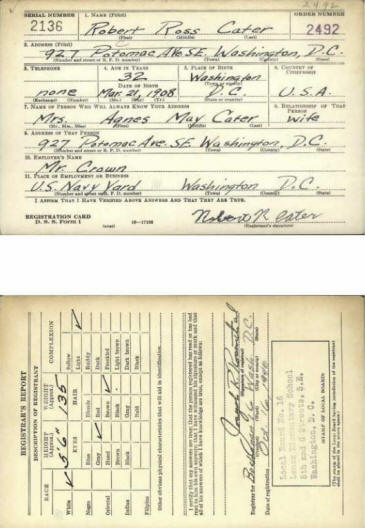 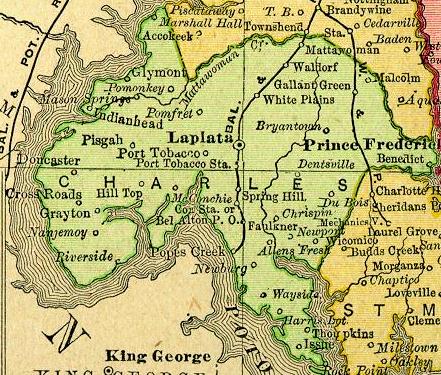 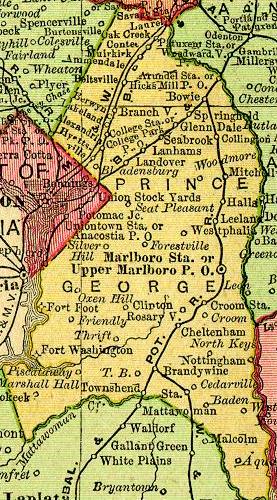 Copyright ©2003-2018. All Rights Reserved.
Click here to send mail to Donna and Patrick Cator with questions or comments.
Visit DAILY CELEBRATIONS an award recipient of the "101 Best Websites for Writers" by WritersDigest.com